The ‘500 Words a Day’ alert that pings up on coach.me (Android, iphone I guess, dunno) is still an essential reminder to wedge some time into the day for writing. Coach.me is kind of useful if you like a prompt to do some kind of daily task, like write, exercise, wash, get out of bed, breathe.

It’s dawning on me that there’s going to be an election and I’m trying to think political thoughts. Today’s thought looked like this:

This is not very useful. If the Wrong Kind of People end up getting a Majority and forming a Government, it’ll probably be my fault. Perhaps the Chicken of Good Fortune is trying to tell me who to vote for.

I have managed to wrangle my various internet domain names to all point at this blog. This is a Triumph of Man over Technology. I’m very sorry if you’ve been trying to connect to me and the internet’s led you a merry dance.

Rule Zero fans will be pleased to hear that I am sprinkling many tasty chunks of backstory into the next Harry Bacon book, The Spherical Void. You’ll find out a lot more about the shape-shifting superhuman Monika, you’ll meet another one of her siblings who has some rather fascinating powers of his own, and you’ll witness the seminal, seismic incident that occurred below the Wiltshire countryside in 2001. Yes, you know the one I mean.

I’m not going to give away everything in The Spherical Void, but there’s certainly a lot more to chew on.

Meanwhile, today was the day that Twitter went down for some people, sparking localised irk. I wanted to tweet my frustrations, but doh. I’ll have to get an instagram for that. 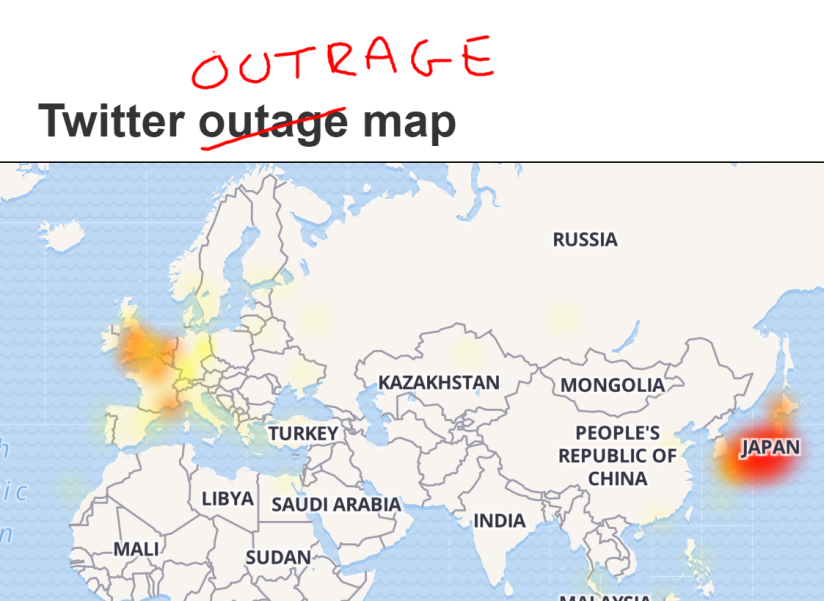 This map indicates that while the UK and parts of Western Europe were mildly irritated by the Twitter out(r)age, the Japanese were literally incandescent.

In other news, I’ve stared at that red dot over Japan for so long now I’m starting to see floating yellow stains on everything.

If you want updates from me whenever there's some interesting Harry Bacon news, click here to give me your email address.

Here's where it all begins. The bestselling, Amazon chart-topping first book in the Harry Bacon series, Rule Zero. Buy now!